skip to main | skip to sidebar
Little purple pansies, touched with yellow gold,
Growing in one corner of the garden old
We are very tiny but must try, try, try
Just one spot to gladden, you and I.

In whatever corner we may chance to grow,
Whether cold or warm the wind may ever blow,
Dark the day or sunny, we must try, try, try
Just one spot to gladden, you and I.

Grandma shared today that she was impressed that a couple of young women came up at a farewell party yesterday and said Hi to her by name (Sis. Cowles). She didn't recognize them by name but realized she had probably taught them in the nursery and was delighted that they remembered her by name. When she got home and went to change her clothes, she discovered that she had still been wearing the nametag received at the hearing loss meeting held before the farewell. No wonder they remembered her.

The rest of the story: they were both the daughters of the woman we were saying good by to! She just hadn't recognized them because they were now grown women! They didn't need a nametag to remember Sis. Cowles!
Posted by Joanne at 8:23 PM No comments:

People from outlying areas would come into Logan on Saturdays to shop. My mother, Bessie and my grandmother, Elizabeth would drive the car and park in the center of town on Main Street. There they would be able to visit with friends and relatives that would come in to shop on Saturday afternoons. Mother would give us each a dime to spend in the 10cent stores. I loved to buy "Big, Little Books." They were children's story books about cowboys, animals and other stories.

One day Grandpa made a U turn in the middle of the block on Main Street in Logan. A policeman (his friend), stopped him and said, "Harry, you know you can't do that!" (meaning it's against the law). And Grandpa responded, "I didn't think I could, but I did, didn't I!" And Grandpa just drove off!

On hot afternoons we'd all pile into Mother's car (5 children, and Grandpa and Grandma as well as Mother who drove). We'd take a trip up into the mountains and so enjoyed the cool breeze and the beauty of the river and mountains. On the way home, Grandpa always stopped at the Drive-in. We'd often order a fudgesicle and Grandpa would always order a "Poopsi-cola." We were so embarrassed and would correct him, yelling (so he could hear us - he was hard of hearing), "Grandpa it's a Pepsi Cola!!"

Grandpa worked in the Logan temple several days each week. He would rev up the motor of his Buick (important to own a Buick) so he could hear it and then zoom out the driveway. I didn't know what a temple worker was and I always thought he was a janitor at the temple. I'm glad to have found out years later that he served others as a temple recorder (not as a janitor).

Before my dad left us, he bought my mother a white car (possibly a Chevrolet). It had previously been a demonstration car and through the white paint we could still read "Mobil" who had sponsored the race car. That was very embarrassing to all of us. Mother drove that car for years until Grandpa and Grandma came to live with her and Grandpa bought her a tan colored Buick.
Posted by Joanne at 6:26 PM 1 comment:

Rolling out the carpet for Grandpa Shaw

While I was visiting Grandpa and Grandma Shaw in Logan during the summers, Grandpa would often sit out on the front porch. When I was about 14 years old, Elizabeth Price (my cousin)taught me how to sew and I purchased some deep green velvet material to make a suit. I laid out the fabric on the living room floor and on into the dining room. Grandpa came in to eat lunch and walked on top of the laid out fabric as if it were his welcome carpet! He left dusty footprints all up and down the fabric! I was horrified to see footprints on my fabric. My children often asked, "What did you do?, what did you say?" I didn't say anything! We wouldn't think of saying anything to our elders! But the fortunate thing was, the fabric was undamaged and I just brushed off the dusty prints. The suit turned out nicely and I wore it for years.
Posted by Joanne at 6:14 PM No comments:

In our Orangevale home, east of Sacramento, in the early 1960's, we built what seemed like miles of brick planters in the front and back yards. We were able to buy historic used brick from the early 1880's (approx) Sacramento courthouse. There was no quality control in those days and the bricks were irregular shapes. Some of the bricks would have one side painted as it had been the inside of a painted wall. It took a large amount of mortar to level the bricks for the planters. One night we had mixed too much mortar so we quietly continued to work into the wee hours of the morning. We didn't want to disturb the Cantoni family, our next-door-neighbors, as we were working near their bedroom windows. The planters turned out beautiful.

After the planters were landscaped, Gordon planted strawberry plants around the other plants in the planters. In a few years we had LOTS of strawberries. They were big and delicious. The girls would go out and pick large bowls of strawberries and once in awhile, our whole dinner would be homemade strawberry shortcake. It was a hit with all of us.
Posted by Joanne at 6:03 PM No comments:

Here are some pictures of Grandma and Grandpa. Happy Anniversary! 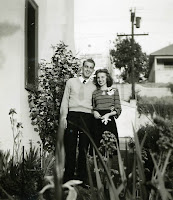 Here is Grandma's story about their wedding day:
We were married on Friday, April 18, 1847 at about 4 pm in our living room at mother’s home. The wedding was held in the afternoon so Gordon could attend his morning classes at USC. We were married in April because we were able to find a place to rent (it was difficult to find a place to live at the end of the war). My mother’s sister, MaRee came down earlier to help my mother get ready for our wedding. We bought a beautiful wedding cake, (a white cake) at the Farmer’s Market on Fairfax near Wilshire in Westwood, Los Angeles. (As of a couple of years ago, there is still a bakery at the same location.) Marion Lewis, mother’s bridge friend, arranged the wedding flowers. There were a couple of bouquet arrangements for a little stand that we put in front of the hearth where we knelt for the wedding. There was a bouquet for Elizabeth Ann (my maid of honor) and boutonnieres for Gordon and his best man, Don Hughes. Gordon and I went into LA about a week before the wedding to buy wedding bands. We bought simple gold bands. My mother was a little disappointed that it was so plain but I still wear it today. (The only time I took it off was when I had surgery a few years ago and they made me remove it - Joanne wore it carefully for me and put it back on my finger as soon as I was awake. And Gordon's ring is at the bottom of Lake Folsom! He had lost weight and it fell off as he was throwing ski lines.)
I wore a gray suit with a wonderful straw hat with small colored flowers on it, black gloves and a purse and black shoes. I wore an orchid on my suit. Aunt Winnie, Aunt Fenya (Gordon’s maternal aunts) and Uncle Whitney went in together and purchase a Navy blue suit for Gordon to wear. He wore a white shirt and tie.
Orson Haney, our stake patriarch officiated at our wedding. I had met him a few months earlier when I received my patriarchal blessing. Gordon had a friend who sang at the wedding (of course he asked to be paid for his singing). Family who attended included Gordon’s Aunt Winnie, Aunt Fenya and Uncle Whitney, (maternal aunts) and Uncle Rielly and Aunt Claudia (paternal uncle). Diltz and Murtel, Gordon’s parents lived in Kansas and did not attend. They had come out to visit earlier in the year. My mother, Bessie Harmon and her sister, MaRee attended along with my brother, G.A. and sister, Elizabeth Ann. Dr. Newman was there as well as my friend Betty with her date, Joe. I had met Betty in a volleyball class at UCLA. Of interest is that Betty and Joe started talking more seriously about their relationship on the way home from our wedding and were eventually married! Sue Bennett and Patty Baldwin, two of my friends, were also invited but I don’t remember if they were able to make it.
We had a small reception after the wedding. I remember having punch in Mother’s cut glass punch bowl, the lovely wedding cake, and nuts and mints. Ada Hanley, who was the cosmetic buyer at Saks Fifth Ave. where I worked, and Mrs. Leavitt a sales lady there, came for the reception. I did not have a bouquet to toss. When I went to get my hat to leave, there was GA with Dr. Newman looking at the guns GA had brought home from the war in Germany. Mother let us take her 1936 Chevrolet on our honeymoon. We had dinner on the way to San Bernardino (a little restaurant along the way), and spent the night in San Bernardino and then the next day went up to Lake Arrowhead where we had first met. Gordon took Monday off from school and we returned to our new apartment on Monday. Soon after that we got word that the whole building was going to be moved and we would have to move. But that’s another story!
Posted by Joanne at 6:42 AM 4 comments:

Today at dinner, Mother was reminded of the time she took her elderly mother to the pharmacy to refill a prescription. There was a long wait and Grandma kept asking Mother, "Why are we here?" Mother would patiently answer to the frequently asked question, "We're here to get your medicine." Then Grandma asked, "What is the medicine for?" Mother, answering honestly, replied, "It's for your memory!" And of course, those who had been waiting in line, had a good laugh. We'll all be there someday!
Posted by Joanne at 3:31 PM No comments: